Girls who hunt are rare, but I am forever thankful that I am one.

My love for hunting started just by going along to the woods with my dad while he hunted. I can still remember seeing my first deer with him and how excited I was. My uncle Ronnie also took me out hunting often, and hunting with him has given me some of my fondest memories. To me, hunting wasn’t primarily about trying to shoot the biggest buck I saw. It was more about the quality time I got to spend with my dad and uncle.

After my uncle passed away, I considered giving it up, because it was something that he and I did together. And, for a while, I did. After a year off though, I decided that he would be disappointed in me. There were so many positive aspects of hunting that I enjoyed because of our time hunting – and I took up hunting again.

Not too long after, I shot my first buck while I was hunting with my dad. The quiet excitement of the hunt and sense of accomplishment was something we were able to share together, and thinking about it still makes me smile. It was a moment I believe we both will never forget.

Over time, I have had other girls ask me how I can just go sit in the woods for hours by myself. I’ve also heard many comments about how girls can’t hunt, or about how cool it is that I do hunt. But no matter the comment, if you’re going to be a girl who likes to hunt and shoot guns, you have to be able to handle the comments that people are going to make, and stick with hunting because you enjoy it. 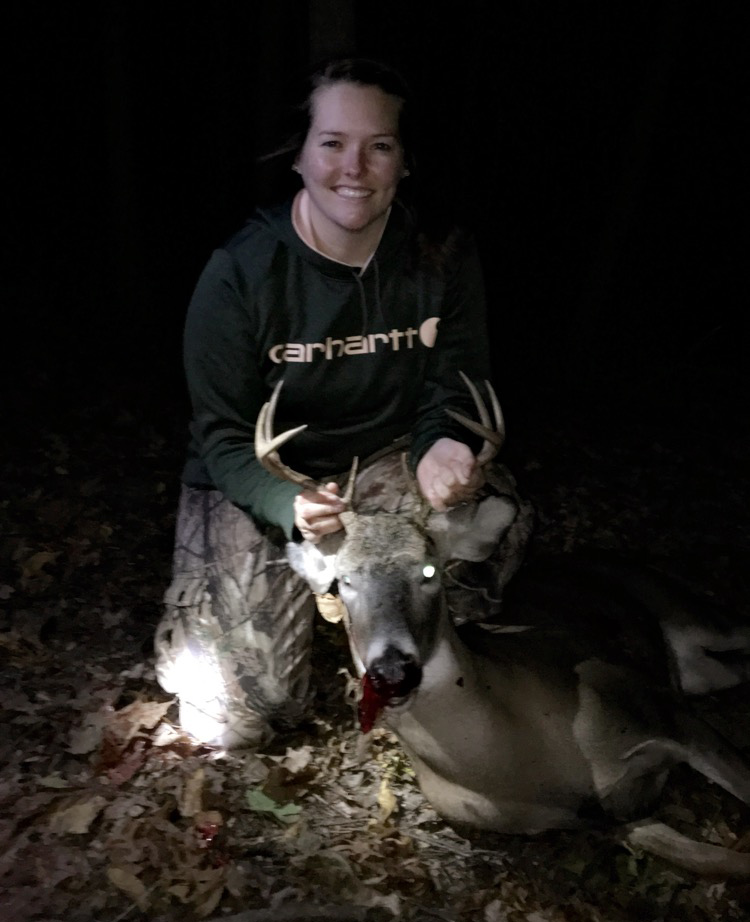 As for me, I absolutely love it. And, even though going through four and a half years of nursing school left me with not much time to get out into the woods, it was a great therapy and stress reliever when I did have that opportunity. I was able to really benefit from having time to take in the beauty of nature and forgetting about everything else for a couple of hours.

This year I only had one free day to go out hunting between work and school, but I got my first bow kill on an 8-point buck. He wasn’t the biggest buck, but in addition to a much needed break - there’s meat in the freezer! I would rather shoot guns and hunt any day, than go shopping and get my nails done. I encourage all girls to get out there and try hunting or shooting guns, even if it is simply an opportunity to hang out with your dad or uncle.