Upon returning from the ATA (Archery Trade Association) show in Indianapolis, Indiana recently, I have a feeling that 2018 will be a good year for the Archery Business. There were several new products that I think will do very well in 2018 and I am looking forward to having them in the store for sale. Here is a sampling:

Ravin Crossbows were a new company in late 2016. And, after a good year in 2017, I was interested to see what they had planned for this year. At the ATA show, we were greeted with two new models—the R10 and the R20. They are both building on the success of their predecessors (the R9 and the R15) and have a lot of the same great features that the old models had, with some welcome changes. The few times last year’s Ravin models were questioned, it typically had to do with how subtle the safety was. And, accordingly, the 2018 model Ravin has introduced a new safety, which is much easier to use and recognize if the crossbow is on safe or fire.

For those of you that don’t know, Feradyne owns several brands that we already carry. They own Rage, Muzzy, Nockturnal, Field Logic, IQ bowsites, Carbon Express, and Wac ‘Em just to name a few. Feradyne had several new products out at the ATA show that drew our interest. Nockturnal had several new lighted nocks including a new orange that I was especially interested in. It seemed brighter than most Nockturnals that I have seen in the past. They have added two new strobe options to their lineup. Last year, the green/red strobe nock was very popular. This year, they added a blue/red strobe and a blue/green strobe to the lineup which should be a nice bow hunting addition.

Feradyne also released a couple new Rage Broadheads to the lineup along with a new muzzy that I think customers will really like. Last year, the Muzzy Hybrid was very successful. This year, they have created a new titanium version of the broadhead, and its overall strength is greatly improved.

IQ Bowsites introduced a new sight called the Define. It has a built in rangefinder. Whatever your 20-yard pin is on it continuously ranges for two minutes. It is perfect for game that is walking or moving while you are at full draw. I am looking forward to getting some here at Sportsman’s Den. 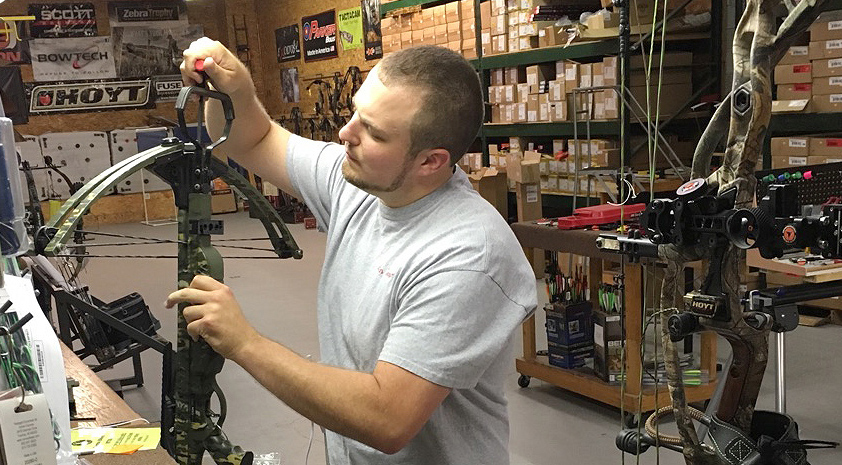 If any compound bow was heavily talked about at the show it was the Mathews Triax. The Triax has been out for a couple of months now and has already received many great reviews in store from those that have shot it. It is extremely quiet and maneuverable. Not only do we have them in stock at the moment, customers are more than welcome to give one a test drive at our range!

Perhaps the most talked about item overall at the ATA show was the new Primos Surroundview Blind. It is a 5 hub blind that features a material that allows you to see out - but nothing outside the blind to see in. It seemed too good to be true, but I was very impressed with what I saw. There are three models of the blind - the 180, 270, and 360. The 180 has two sides with the new fabric, while the 270 has three and the 360 has four. This is something I really had to see to believe. It is fantastic – and you can check them out too, because we have one on display at the Den.

Overall I am excited to see what 2018 holds for the archery industry. There were many improved and new products that were worthwhile considerations as upgrades and tweaks to what I already do – and I suspect it will be the same for most archery enthusiasts. Be sure to stop in and check out the new 2018 products. I don’t think you will be disappointed.